The implemented upgrade items keep the well established combat & service features of the DANA system unchanged and at the same time transform the weapon into an up-todate and more powerful system.

The DANA-M1 CZ boasts an unbeatable rate of fire, greater firing accuracy, excellent vehicle mobility and reliable operation of the system. All these qualities predestine the DANA-M1 CZ Self Propelled Gun Howitzer to play a significant role in the modern era of artillery support.

The solution includes a new, high-performance fire control system (FCS) that boosts the combat efficiency of the system and at the same time simplifies its operation. The newly developed solution of the FCS is based upon the use of state-of-the-art technologies allowing the DANA-M1 CZ to be integrated into the C4I system.

Unit is mechanically linked to the barrel axis. This allows complicated and time consuming topographical orientation of the gun to be skipped. The inertial topographical navigation unit continuously transfers the current data on the system position and traverse and elevation angles to the ballistic computer.

Is the heart of the fire control system and conducts the following:

The upgrade of the chassis has resulted in substantially improved driving properties and manoeuvrability of the vehicle.

The steering system has been modified and the TATRA-NORGEN shift-by-wire system has been newly added. The T3-930 engine has also undergone a major upgrade; new turbochargers and an intercooler have been fitted which results in enhanced torque behaviour and power curve.

Several modifications have been made to the cabin. The driver’s field of view has been improved, the steering system and the driver’s instrument panel have been modified. New seats and an independent air conditioning unit have been installed. The vehicle has also been furnished with a new lightning system including a BLACKOUT feature and a reverse camera. 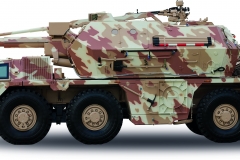 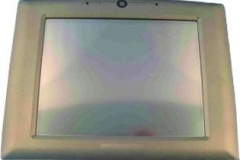