Application of the turret. The MGC-14.5 turret is meant to replace the original BMP-1 turret when converting the infantry fighting vehicle to the armoured personnel carrier. It is virtually a modified BMP-1 turret which may be fitted to the vehicle in lieu of the original turret. The modification includes replacement of the 73 mm cannon with a 14.5 mm machine gun. The cannon, ammunition conveyor, automatic loading mechanism and ATGM launching and guiding system have been removed from the turret. As the other components including controls have been retained, the logistic support and the training of gunners are virtually identical to those of the BMP-1.

The turret is equipped with the 1 PN 22 M4 sight. It is a passive combined periscope sight (for day and night observation). The elevation and traverse may be operated electrically or manually. For electric operation there is a control panel situated in front of the gunner. Manual control is performed by means of control hand wheels within the gunner’s reach. The turret traverse may be locked during transport. The locking device is found left of the gunner’s seat. The machine guns may be fired by means of the control panel or the traverse/elevation mechanism control hand wheels.

The cone-shaped turret is made of welded armour steel. The roof includes a multiangular superstructure including a gunner’s hatch. There are four TNPO-170 periscopes round the hatch allowing the crew to observe the vehicle’s neighbourhood. On the inside of the roof there is a fan for fire aftergases.

The power system is a single-wire 24V DC with a ground negative pole. The turret includes the control box and fuse box and terminal switches for limiting elevation and depression of the armament. The turret is furnished with an Intercom box and a helmet connector. 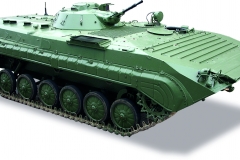 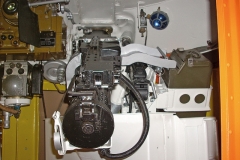 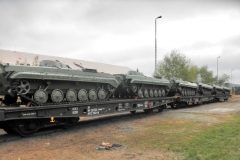